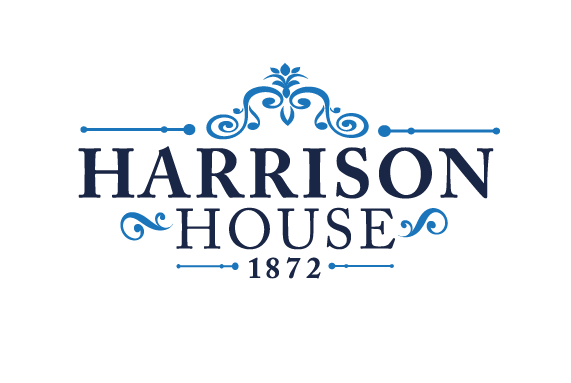 Mr. Harrison was the president of the Glasgow Savings Bank and worked his way up from starting as clerk when the company began as the Birch, Earickson & Co. banking institution.

George was a devoted businessman and known for being kind-hearted, generous and helpful man in spirit to who met everyone as an equal despite his own status and wealth. All classes, rich and poor, black and white, freely sought him as friend and helper. He was always at hand when any interest of Glasgow or of any of its people were in need of encouragement or support.

In 1912, following the death of Mr. Harrison, Mrs. Harrison sold Harrison House to Lloyd and Nancy Herring. They resided in the house until Mr. Herring died in 1926, which was passed to Ralph and Nanny Mae Maupin who lived in the house with their three daughters for the next 48 years until passing it onto Richard and Vivian Bentley in 1978.  The house was acquired by Mark and Susan Freese in 2009.

According to Historian Jim Denny, the Harrison House style is considered Italianate but is not typical to the features of that style.  “This is a Victorian house form in that it breaks free of the classical I shape the house forms with a front block with a hallway flanked by rooms presenting symmetrical 3 or 5 bay facades. Here a front block projects forward flanked by beautiful porches with early Victorian woodwork.”

The house still has the original marble-faced fireplaces and mantles found in many rooms and the hardwood floors.

Another bit of interesting history is noted by the Plank Road monument located in front of the Harrison House. By 1850, Missouri planters sold the majority of their tobacco to St. Louis, and Howard County growers remained the single largest group of exporters. The 26-mile road became an export spine of the region: the Glasgow to Huntsville via Armstrong Plank Road until maintenance was discontinued and the road was removed in 1877.